This is a _project I've been working on for a few years, finally ready for IPT - initial public _tinkering. 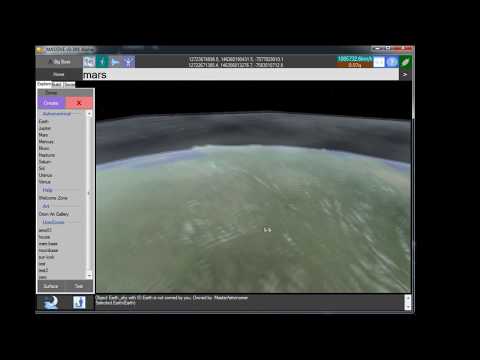 _MASSIVE is a _massively multiplayer open sandbox _universe with _crafting. You can even upload your own photos or textures for any object you own. Is it a game? A new _Internet? Is _MASSIVE the next VR Facebook? I don't know, but it's happening.

The vision:
The grand vision is another universe, where real homes and shops exist in VR space. Want a delicious pizza? Hop on _MASSIVE and Teleport to the pizza restaurant, browse the menu, and order right there. You get the whole pizza parlour experience without the queue.
Want to visit an Art Gallery in _New York? Hop in the teleporter and you're there, along with other art lovers. Chat with people around you about the importance of mauve, or even buy a painting, real or virtual.
Have virtual VR meetings. Hang out with your friends in their VR home they built while eating the delicious pizza you just ordered.

Features:
Full size universe to explore and build. That's 16,000,000,000,000,000,000,000,000, 000, 000km in every direction! It's one continuous, multiplayer universe. You can walk from any area to another without teleporting, or you can teleport to zones because teleporting kicks-ass and life's short.
Add your own zones to the public zone directory. A zone address is like a URL. Or a bookmark.
All your favourite Solar System planets, to scale. Build anywhere on Mars. Build on the Moon. Or even on Earth if that's your thing.
Universe sized physics, including localized gravity. In _MASSIVE there is no single "UP" vector. Up depends on the real gravity around you according to Astrophysics calculations (Real Astrophysicians please don't examine my numbers too closely). When you build you are always building perpendicular to the current gravity. Gravity is calculated based on all the astronomical bodies around you, so if you're floating in space you may fall towards the moon, or earth, depending on your location. Just like Kerbal!
Upload your own _textures. Build a house, build a wall, add a picture frame, upload a photo of _granny. It's your space, do what the heck you want.
People can't build in your zone. Once you lay a foundation block you have claimed that property. No land grabs! Early adopters will get prime properties (I heard that Waterfront virtual property is going to be worth a lot!)
Maps of your favourite planets. Just click and you're there, more or less near the surface. Not to worry, there's a teleport to surface button if you don't like skydiving.
Streaming images and (coming soon) 3D models. That means you only download the content for the zones near you, and it's all done behind the scenes.
MultiThreaded environment. _MASSIVE starts up quickly, content is streamed in.
Public JSON API. E.g. City planners can upload road segments via an API.

Current limitations / in development / bugs:
100 crafting objects per player. 100 concurrent players. (this is just during testing, release will be unlimited)
Very much in development. "It works on my machine". Some testers would be appreciated. Early _Voortrekkers will probably get prime land.
Graphics are not brilliant yet. The priority has been to create a craftable universe before I polish the furniture.
Very few building blocks. (A foundation, walls, a doorway, cubes, pictures, a wedge/ramp, and big light spheres)
Navigation is a little awkward. Quaternions on a flat earth are easy. Quaternions in real space with a localized gravity vector are more complex.
No character animation yet. Only 2 fugly-ass avatars.
Text Chat is for all, no proximity yet. Just text chat for now, will implement proximity voice soon.
No economy yet. (in development. _Blockchain?)
Server is limited. I've hard-limited the max concurrent players to 100 for now while I figure out how to scale the server.
(Vertical? Horizontal? Diagonal? Trans-dimensional?)
Windows 64 only (for now). Anyone wanna help with a Mac port?

Some of the challenges I've overcome/am overcoming.
_MASSIVE is native C# and OPENGL. Yup, it's not written in Unity. Unity is simply not up to the task of rendering full-size anything without a lot of hacks due to floating point precision problems. So I've built my own engine with Blackjack and ... big coordinates.
_MASSIVE has very few spatial hacks, coordinates are in real meters, up to the full 64bit of 10^308, although the usable portion is about 1/100th that, which is still the size of the Universe x 2. Planets are to scale.
Adapting a physics engine to work in 64bit coordinate space. I chose to mod Bullet, purely because it's free. Bullet has a few issues / limited documentation, but it works. Creating a collision planet mesh in Bullet is no small task.
The world is big. Rendering a full size Earth requires a lot of textures, so I've chosen a simplified mesh (simplified by our eyes, it's still the max density possible for a single mesh in OPENGL). The planet _Meshes still needs to be subdivided using ROAM or some planet rendering technique, that's in the TODO.
The server has to do _spatial stuff on a universal scale. Obviously you don't want to load the entire universe, just what's around you. Nearby objects are streamed to the user/player.

Everyone is welcome to jump in the _MASSIVE universe and build. All you need is a Windows PC and an okay graphics card with 2GB RAM. (I still have to optimize textures and culling)
Download the _MASSIVE alpha 0.1 here

You can build teleporters and texture them how you want. (warning: crappy developer art)

Someone built an art gallery near the Constellation Orion. It has great atmosphere.