I'd like to start the year off by sharing a prototype about cave exploration that could do with some honest MGSA style feedback :)

Note: Audio and Visuals are just placeholders for now, and the "collect gems" gameplay is just to make testing a little bit more entertaining.

The main focus of the prototype is to button down the character movement - I'm trying to aim for snappy but somewhat forgiving player controls; because the game will be targeted more towards exploration than "control/twitch skills".

Does the physics (movement, grappling, swimming) feel good enough without emulating reality?
Does any of the navigation controls feel wrong or need improvement?
Any glaring glitches?

I've also added a health/stamina system to facilitate some RPG elements later on (skill levels, better equipment, etc.). This may be fine as-is, but may require some balancing to get the initial levels right.

Does the darkness and flashlight mechanics work?
Does it give the feeling of being lost and claustrophobic without hampering gameplay?

Both schemes are supported, so if anyone has the ability to give feedback on controllers that would be awesome.

Quick vid on what to expect: 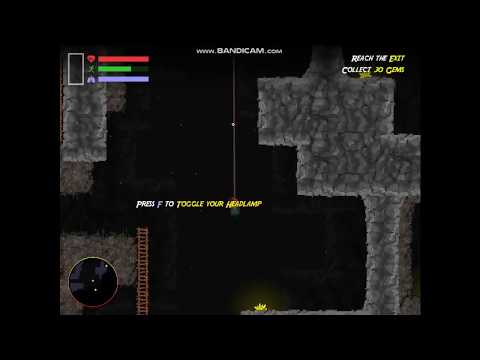