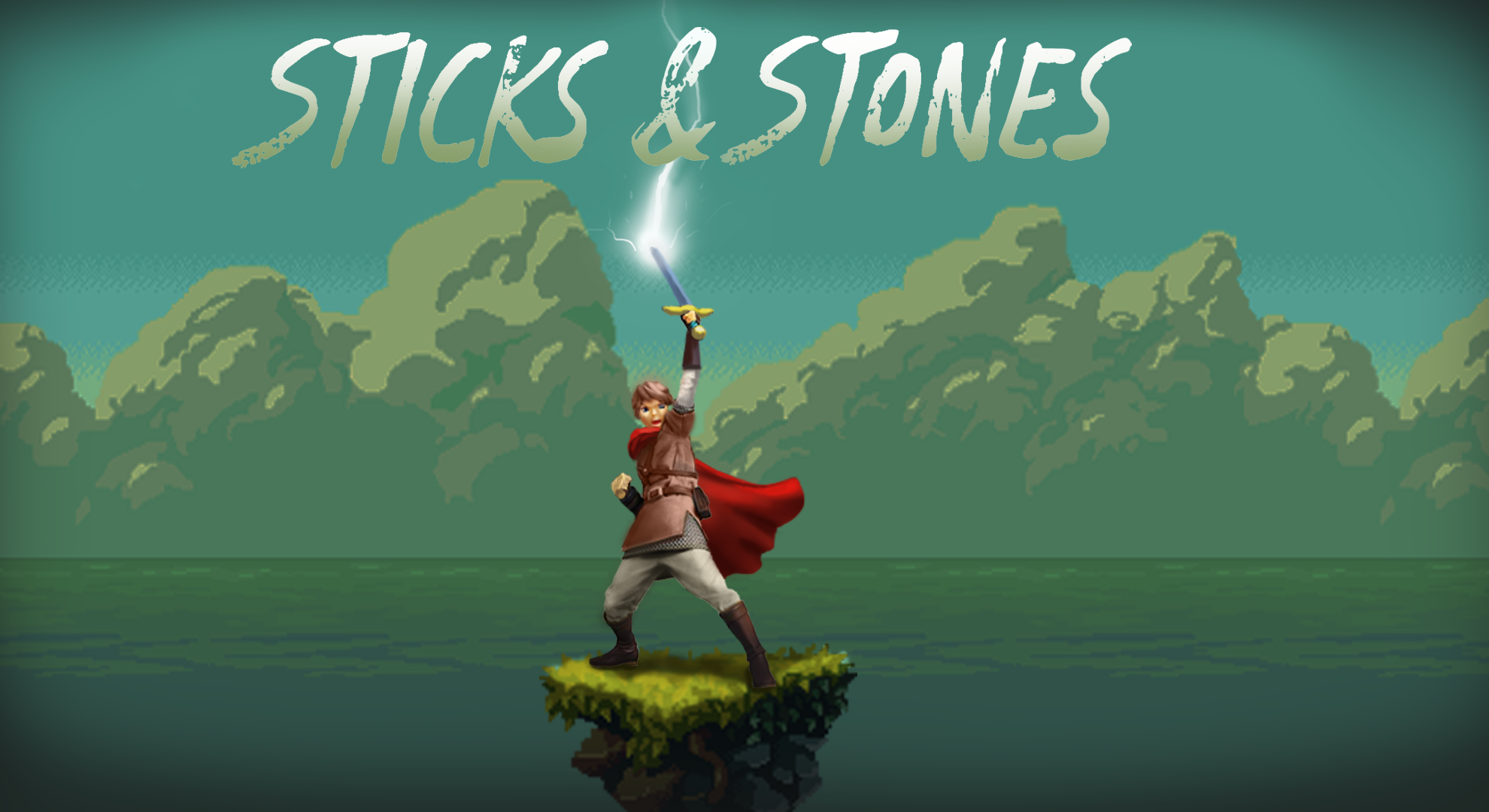 Sticks and Stones: The Craftening is a game of the most dedicated, and furiously fast-fingered blacksmith in all the Land.

Tasked with cleansing the plague of undeath from the forests of Forestia, our most brave lad of lads must use his absolute unit-like lightning-fast fingers to slow time and craft his enemy's ultimately devastating demise.

Who can stop this stalwart defender of human truths and peasant rights?

Step 1: Find Materials with your eagle-like super vision.
Step 2: Use your amazing lightning-fast fingers to make the world go slooooow while you pick the pieces of your recipe.
Step 3: Call on the power of your Blacksmithing Gods to set ablaze the forge that is your hands so you can craft weapons anywhere and everywhere.
Step 4: Realise that all your remaining components which were not used on the weapon's recipe have melded into the weapon anyway, strengthening its durability. THE GODS DON'T WASTE CRAFTING MATERIALS!
Step 5: Use your absolute-unit-like brawn up close or your time-bending-360-degree-chameleon-vision focus when aiming down the crosshairs of the bladed beauties you just breathed life into.
Step 6: Remember the weapons that have spilled monster blood for you. Cherish the memory of each and every one of them when they break. Because they will break. And when they do, you'll be scouring the land to get your revenge on the sons of breeches-and-weapon ruining monsters.

Be the most epic Blacksmith you were always meant to be and maybe the Bards will share your tale.

Progress Update 2:
We've updated quite a few visual cues as well as rounding up the types of game modes we wanted. We couldn't really add too much depth to the narrative, sadly, as we think it could have been really nice, but we feel the gameplay is pretty solid.

Progress Update 3:
We've added an Endless Mode for those who just want to have a go at the mechanics without end. And finally, we uploaded our Windows build (As seen at the top of the post). A recipe list will follow, as well as possibly a WebGL build.

Progress Update 4:
Unfortunately we ran out of time and cannot supply a WebGL build, as the one we have is broken.

List of Recipes:
1 Wood = A Brittle 2x4 Plank of Utmost Justice
1 Iron, 1 Leather = A Gleaming Sword to cut Truth from Evil
1 Wood, 1 Iron = A Hatchet with the spinning power of all the ocean's whirlpools.
1 Leather, 1 Bone = A Spear to pierce the hearts of your enemies from 10 miles off.
1 Leather, 2 Iron = A Hammer as durable as the mountains themselves.
1 Wood, 1 Soul, 1 Bone = A Staff for utmost thwacking (Yes, a spell would have been cool, but there wasn't time.)
3 Soul + Your Weapon (If one is equipped) = A Full Restoration of your Smithy's Health

Try hitting the diamonds in Story Mode by throwing your weapon with the Right Mouse Button *The Tip Text seems to be bugging in terms of position on some PCs, so you can't see the message. Thought I'd state it here.

Update 1 Notes:
- Cleaned up the UI to better show on screens with resolutions smaller than 1920 x 1080, as well as tweaking it here and there to make text more legible.
- Added a list of Controls on the main menu splash.
- Tweaked controls for those who want to use the arrow keys as opposed to WASD.
- Tweaked the Blacksmith's Dialogue in the 1st level of Story to reflect the control changes.
- Increased the rate at which materials drop in Endless Mode and slightly decreased the rate at which enemies spawn.
- Added a list of recipes in Endless Mode. This is visible at all times to better the experience. Crafting when you've put a bit of distance between you and enemies should give ample time to read and implement a recipe.
- Fixed a bug where upon restarting Endless Mode there would immediately be enemies present.
- Fixed a bug where the player would get carried off of the map in Endless when dying on top of a horde of enemies. (Not entirely fixed, but you can press Escape to restart the level so it shouldn't be an issue.)
- Fixed the Endless Mode not having barriers which caused some players to fall of the screen when trying to evade masses of enemies.